Also Read: How to Use Facebook to Find Free Wi-Fi Connection Anywhere

The social media giant revealed that Ads will be displayed on home tab of Messenger App. the company explained that the users who will click on the Ads will either be taken to the advertiser’s website of chat window.

The company plans to test this feature in Australia and Thailand in January. Facebook messenger has 1.2 billion monthly users and it allows users to have conversations and to send them sponsored content. 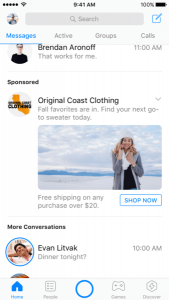 In a recent report, Facebook revealed that it earns 85 percent of ad revenue from mobile. Facebook is trying to earn money from Facebook Messenger App to supplement its main revenue stream. Facebook shares were up 1.1 percent at $155.19 on Tuesday.

Adverts which link messenger conversations can also connect to advertiser’s chatbots. Advertisers can also use original in Messenger ad format and sponsored messages to target users who were connected with company on messenger.