Facebook keeps on introducing new features for its users due to which it has become the top messaging and picture sharing app around the globe in a very short period. The tech giant tries to keep its users engaged by launching new features so that it can provide a better user experience. A couple of months ago, Facebook announced that it has been working on a dedicated Dark Mode for its mobile app. Recently, the company has started testing the Facebook Messenger’s Dark Mode that’s why its rollout seems imminent.

Facebook Messenger’s Dark Mode Is Under Testing Ahead Of Launch

We all know that many of the social media Apps have already introduced this feature. We don’t know why it took too long for Facebook to introduce this dedicated mode. Anyhow, the Facebook-owned messaging app has started rolling out the UI option to a limited number of users living in just a handful of countries. Even though, we don’t know the list of the countries in which this feature is under testing. However, the recent reports have unveiled that this new feature will soon make its way to all Messenger users. 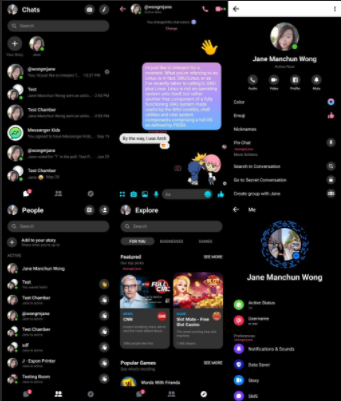 This mode will be quite similar to the other Dark Mode implementations.  Messenger’s new feature will turn the previously-white background black. In addition to this, the black text will also be switched to white. Moreover, anything that is light gray in color will be replaced with a darker tone. However, the colorful elements will remain completely unchanged. The feature is not available yet. Even though, those lucky people who are testing it don’t have the access to the complete feature.  In fact, upon activating it, Messenger warns the users that it will not “appear everywhere” because the tech giant is still putting the “finishing touches” on the feature. Hopefully, we will not have to wait too long to get this feature.