A few weeks ago, we came to know that Facebook Messenger’s Latest Update is all set to bring new interesting features. The social giant simplified its user interface by removing all the shortcuts and fancy buttons. Recently, we came to know that Facebook messenger is working on Unsend Message feature. Facebook Messenger’s Unsend Feature will remove the message from the chat as well as from the recipient’s inbox.

Facebook further disclosed that the company had secretly deleted some old messages sent on Messenger by founder and CEO Mark Zuckerberg. Normally when we delete messages from our own inbox, those messages still remain in the recipient’s inbox. Now the company is testing this new Unsend Feature which will let you take your words back.
When you will long press on a sent message, it will now give you two options that are; delete or unsend it. Selecting the delete option will end up removing it from your side of the conversation only. While on the other hand, when you will select the “Unsend Message” option it will remove it from the receiving party’s view, as well.

However, a tipster Jane Wong tweeted screenshots of the unsend feature in use on Android. He further unveiled that users will only be able to unsend a message for a limited amount of time after it’s been sent. When you will select unsend message option, a pop-up will appear saying that:

“Your message will be removed from the chat, and you.” 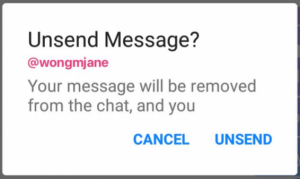 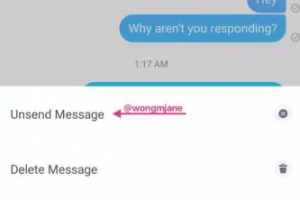 Then there will be a time limit for unsending that particular message. However, we don’t know that what will be the time limit for that. Before making it publicly available, Facebook will test it properly. So, let’s see when will this feature roll out for all Messenger Users.