In 2015, Facebook launched Messenger Lite in order to build more apps to boost usage in those countries, where people use more lower-end Android devices and mobile usage is also very costly. Messenger Lite can work in at under 10MB, which means that users can install it quickly and can easily use the messenger.

Initially when Messenger Lite was launched, it’s main purpose was to send text messages, sharing photos, links and stickers. But now Messenger Lite will also offer video chat to the users that they can also enjoy all the features as others in Main Facebook Messenger. 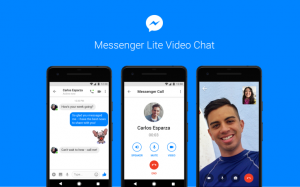 For video chat, you just have to tap the video icon in the corner or in the middle of the screen to switch to video. So that means Lite users are moving to more advanced services.

“Video chats are an expected and essential part of everyday communication in today’s messaging experience, Chatting face-to-face live is perfect for those moments when you want to see and hear the voices of people you care about most – whether you’re wishing someone a happy birthday, you have some great news to share, or you spontaneously want to catch up on the day.”

Today Messenger Lite is working in 100 countries. According to stats from AppAnnie, Messenger Lite has reached top 10 app rankings, and definitely in the top 25 of dozens of smaller countries.

Facebook is now working to boost the features in the app, because company estimates that Messenger Lite has more than 100 million installs all over the world till date.  Amazingly, it has been noted that developing countries has strong market for main messenger too. However, after addition of video chat, we can say that Messenger Lite is also good option for those who have updated and high ended Android devices.
Read Next: Facebook Launched Messenger Lite in US, Canada and UK
Zainab SaeedLast Updated: Mar 8, 2018
Share
Facebook Twitter Pinterest