We all know that TikTok is a social short video platform that allows users to create and share videos powered by music. It also offers Live Broadcasting. It is a platform of entertainment for many people. Most of the users nowadays spend their free time making videos on this platform. That’s the reason that it has become the fastest growing platform in just a few months. Due to the growing trend of short, fun videos now Facebook has also launched a similar App named Lasso. Facebook’s Lasso is a new standalone App that seems to be a TikTok clone.

Lasso is a standalone App similar to TikTok that allows users to make short fun videos. Facebook has basically introduced this App to become famous among teenagers as it has lost its popularity due to some issues in the past few months. Using this newly introduced App, Lasso, users can record themselves dancing and lip-syncing to music. It is exactly the same as they already do on TikTok.

There had been no official statement about this App on Facebook’s website. Facebook product manager, Andy Huang announced the App. After that, Bowen Pan, the product manager for Lasso specifically, tweeted about it. Let’s have a look at that. 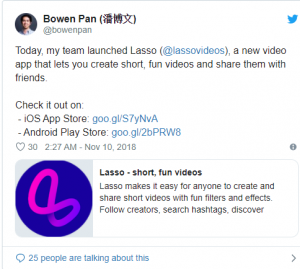 “Lasso is a new standalone app for short-form, entertaining videos — from comedy to beauty to fitness and more. We’re excited about the potential here, and we’ll be gathering feedback from people and creators.”

This App is available for both Android and iOS users. After downloading the App, first of all, you have to sign in to Lasso through Instagram or you can create an account using Facebook. Then you will have to authorize the app. This is done to allow access to your profile page, photos, and videos. That’s it. After doing so you can enjoy making fun videos.