Oculus, the Virtual reality company started shipping its most waited for Rift headsets from Monday, almost two years after the company was attained by social media giant Facebook Inc.

The initial investors in Oculus’s fundraising campaign on crowdfunding website Kickstarter in 2012 started getting their Rift headsets from Monday.

Oculus informed that pre-orders for the Rift headsets will start from mid-week. The company, established in 2012, initiated a campaign on Kickstarter to elevate $250,000. A few years later, Facebook bought Oculus for almost $2 billion.

Mark Zuckerberg, Facebook’s Chief Executive has also said that he witnessed virtual reality as the next key computing platform. In a post on Facebook he revealed his excitement about the shipment. 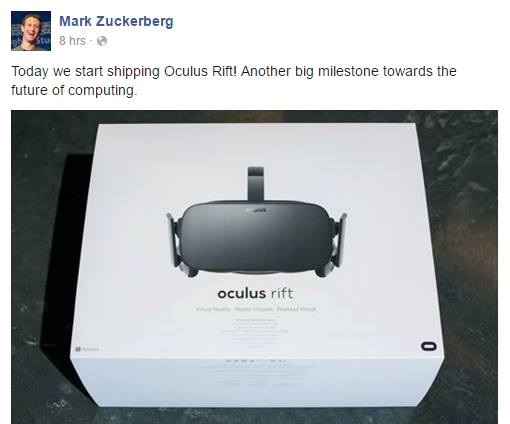 “The headset you can buy today is not Oculus’s most ambitious vision for virtual reality – but it’s a vision that Oculus has successfully delivered on.”

On Monday, Adi Robertson of technology website the Verge revealed in a review.

Valued at $599, the black Rift Headset, emanates with a remote, an audio system, a sensor and an Xbox One wireless controller.

Oculus also informed that there were more than 30 games accessible on the Oculus Store and it would add feature-length movies and more content within a matter of no time.