The Facebook PWA is not showing up for everyone yet. When you go to the mobile Facebook site, you may see a new pop-up at the bottom of the screen asking you to add Facebook to your home screen. Tapping it shows Chrome’s regular “Add to Home screen” menu, except the icon, is a little different this time. It shows that Facebook is recently working on PWA. 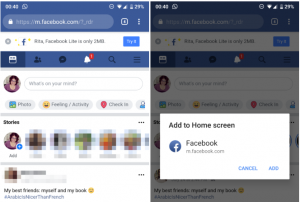 The differences between the non-PWA Facebook mobile site and the PWA one start from their icons. Let’s have a look at that.

You just get a new tab inside the full Chrome browser, with the top address and menu bar in the regular non- PWA facebook but the PWA bookmark is different from it. For the PWA, a white splash screen flashes first, then the site loads. PWA Facebook looks more app-like without the top bar. 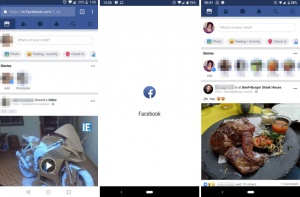 One of the benefits is that the PWA version of Facebook acts as a separate app in the Overview switcher. It enables the users to close the app or come back to it independently from Chrome. We can expect more PWA capabilities very soon. All you have to do is to wait for the server-side test to land for you on the mobile page.