We all know that Facebook has been facing a lot of issues for a few months. Furthermore, it came into the limelight for privacy concerns and spreading fake news. We all know that the platform has been used extensively by people and agencies to spread the fake news in the past few months. This was done mostly for advertisement purposes, as well as to influence people’s opinions. Due to all these facts, Facebook’s usage for News declined.

People’s trust on Facebook is at a low record after the numerous fake news scandals, privacy concerns, and other irregularities.  Reuters Institute for the Study of Journalism (RISJ) studies trends in user activities on different social networks.

Recently, Reuters Institute for the Study of Journalism (RISJ) and Kantar Media conducted a research. They studied the latest trends in user activity on the social network, Facebook. The results were not satisfying. According to their latest study, people are relying less on Facebook to check the latest news. 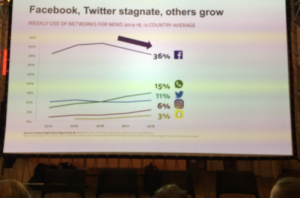 In the past, some Russian entities used Facebook to influence electoral voters, by creating numerous fake accounts to spread fake news. Due to a lot of such scandals related to fake news, people have lost their trust on Facebook. They have started to check the news on social networks other than Facebook. This has affected the reputation of the social media giant, Facebook a lot.

Facebook itself has been scrutinizing content posted on its platform. Moreover, it has been getting rid of posts or pictures that are against its revised content policy. The company must have to take drastic steps to combat all such issues which are ruining its reputation. Otherwise, it will have to face a severe downfall.
Also Read: Facebook Lite Latest Update Brings Community Help support