At the end of last year, we heard about Uber’s intentions to come to Pakistan and launch its services. Now the company is officially here. They have launch their initial services in Lahore and after few months Uber will also be launched in Islamabad and Karachi.

The audience were informed about the plans and details of Uber in a launch event held yesterday at Lahore; which was attended by Loic Amado, Uber’s International Launcher for Middle East & Pakistan, and Amna, Manager Marketing for Uber Pakistan.

“We’re extremely excited to be here, there’s huge potential in this market and people have welcomed us with open arms.”

“Twenty per cent of all ecommerce transactions happen in Lahore, which is why we’re here first. We’re looking forward to filling a gap in the existing transportation network.” 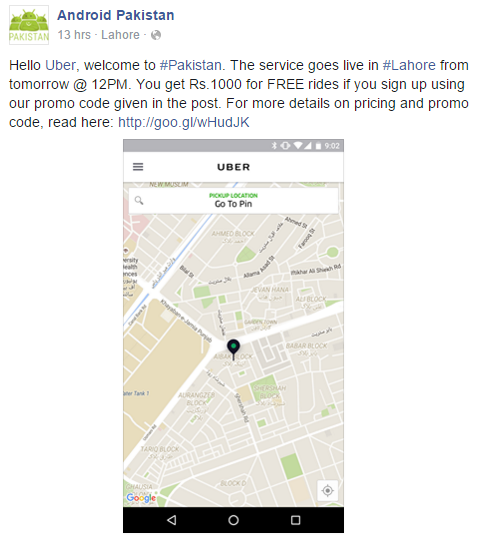 The riders of Lahore will initially be offered only UberGO, while UberBlack and UberLux will arrive later on. UberEats and UberPool will also be launched on later stages. It will charge 13.7/km whereas with a basic fare of Rs. 100.

Also Read: Uber Officially Confirms to Enter Pakistani Market by the End of 2015

Uber has presently offered its UberGo vehicles in Pakistan, which include: Toyota Vitz, Suzuki Swifts, Honda Civics and Toyota Corollas.