Around ten months back, Sirin Labs unveiled the Finney, terming it as the world’s first blockchain phone. From that time, surprisingly there were no rumours about the device. Just recently, the company launched the final design of Finney Blockchain Phone and no doubt, Finney, endorsed by Lionel Messi has some interesting facts.

Firstly, Finney BlockChain Phone is a dual-screen device with a 2-inch safe screen sliding up from the back of the phone’s main 6-inch display. Sirin labs revealed that second display will work on dedicated firmware, which will be used for wallet transactions.

While telling about the embedded wallet of Finney phone, Sirin Labs revealed that:

“On top of that embedded wallet, there is a comprehensive and multi-layer cybersecurity suite” that’s based on the company’s proprietary Sirin OS, which itself is an offshoot of Android 8.1” 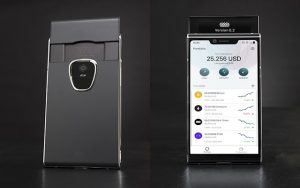 Finney is not the only one who is working on cryptocurrency device, HTC also revealed that it is planning to bring HTC Blockchain phone in the market by the end of this year. So let’s see who will win as we don’t know the launch date of Finney Blockchain Phone.

Let’s see when Sirin labs are going to announce more details of the phone. Till then we will keep on updating you.