Apple has plenty of physical shops spanning the globe, acting as service centers and cultural centres where customers can learn to be more artistic. And none of these glittering Apple meccas have been built on water so far. First global Apple floating store set to launch in Singapore.

Apple ‘s third storefront in Singapore is expected to open early and the fanboys of the tech giant are in for a surprise-it’s floating on water. The new outlet at Marina Bay Sands will be the world’s first Apple shop on water.

Perhaps it’s this specific name image that makes Apple one of the world’s most successful businesses, having recently been the first publicly traded U.S. company to hit market valuation of US$ 2 trillion. It seems any new version of the iPhone is considered the must-have for casual users as well as tech geeks. 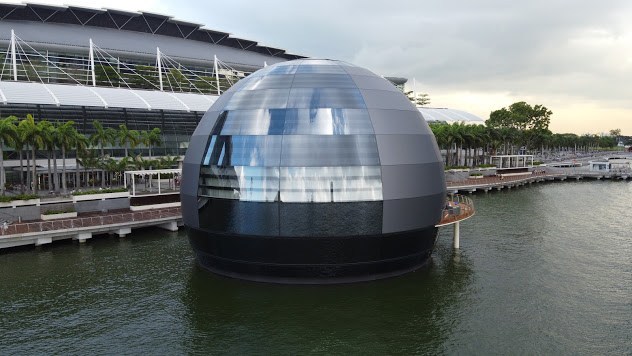 As recorded by Archigardner, the store replaces a shard-shaped Crystal Pavilion that once hosted a nightclub called Avalon. Apple has reconstructed the structure with glass panels which represent the skyline of Singapore during the day and glow like a lantern at night. The shape of the structure tells a radically new store architecture, “teased the client, and is partially illuminated by a triangular window at the top of the dome.

According to Apple, the Marina Bay Sands flagship will be at the center of creativity, a space that we have built for you to catch your thoughts and passions. For comparative analysis, Microsoft announced it will close all its physical stores and move four, based in London, New York City, Sydney and Redmond, into community-focused Experience Centers.