The mobile gaming business has swiftly grown to become one of the world’s most successful and lucrative entertainment sectors. The highest-grossing mobile games are now routinely topping $100 million per month, with Asia accounting for the majority of consumer spending, owing to countries like China, South Korea, and Japan.

Interesting Fact: Majority of the Mobile game users are Women !

If you’ve ever glanced at the highest-grossing mobile game charts each month, you’ll note that there aren’t many significant changes — the same games frequently reign supreme throughout the year. PUBG Mobile, Garena Free Fire, Coin Master, Brawl Stars, and Empires & Puzzles are among the eight new entries into the year’s top 30 income earners. 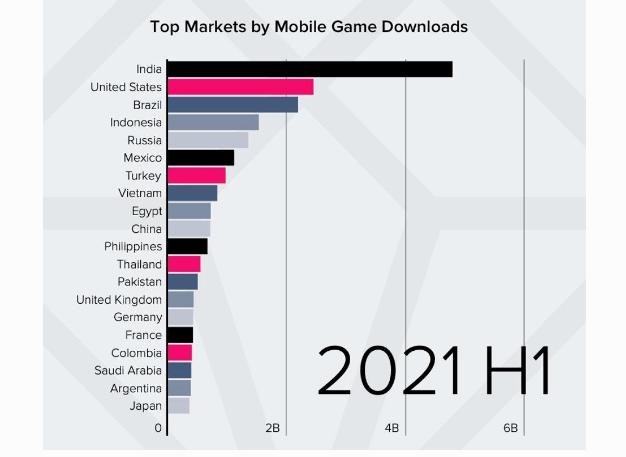 The pioneers of the mobile gaming business include Garena Free Fire and Tencent’s PUBG Mobile. PUBG Mobile has become the second highest-grossing mobile game in the month of June 2021.

As one of the first freemium applications to earn over $1 billion in revenue in 2021, Candy Crush Saga paved the door for a new generation of mobile games.

In 2012, King, which was already the second largest Facebook gaming producer, viewed mobile as the next step for freemium games and released Candy Crush Saga, which was already popular.  It also competed against Clash of Clans for highest grossing game from 2013 to 2017.

We all remember the days when Pokémon GO was all the rage, and everyone was running around outside capturing Pokémon in the augmented reality app.

According to analyst firm Sensor Tower, Pokémon GO has generated $5 billion in revenue over the last five years, averaging $1 billion every year. Pokémon GO, on the other hand, never went away, and its popularity has only risen in the previous five years, resulting in a huge milestone.

Supercell’s most popular game, Clash of Clans, has made the firm a household name in the mobile world. The game was first released for iOS, followed by an Android version a year later.

Four Clash of Clans spin-off games have been released, all based in the same environment. Clash Royale was the first spinoff, released in 2016, with three more announced earlier this year: Clash Mini, Clash Quest and Clash Heroes.

Monster Strike is a physics-based role-playing game with puzzles and multiplayer elements.

Monster Strike, like many of the other games on this list, was a huge hit in Japan, and by 2014, it had snatched the top place for the highest-grossing mobile game. Monster Strike, according to developer Mixi (previously known as XFLAG), saved the firm from closure.

Monster Strike’s lack of international success hasn’t been a problem, since the RPG is the world’s second most popular mobile game, with over 50M downloads.