Since the 90s computers and internet access has become more and more affordable and accessible with 80% of UK households now owning or having access to a computer in their home, a subscription list that is forever growing for the players which are playing online games worldwide.
All new games consoles now have internet access allowing you to play games with people from across the world whilst sitting in the comfort of your own living room. Online gaming is without doubt an advancing form of entertainment.

The next evolution in tactical football games. Designed for tablets and phones.
“Fluid Football is like the perfect blend of New Star Soccer, Score Great Goals and Flick Kick” – T3
Requirements: Compatible with iPhone, iPod touch and iPad. Requires iOS 4.2 or later.. Android
No 1 gameNo. 1 in All Apps in Portugal and No. 2 in UK, Italy and Argentina! in UK, Italy, Spain, Portugal, Argentina, Mexico, Poland and 11 other countries.

MARVEL War of Heroes(iPhone and android)

Requirements: Compatible with iPhone 3GS, iPhone 4, iPhone 4S, iPhone 5, iPod touch (3rd generation), iPod touch (4th generation), iPod touch (5th generation) and iPad. Requires iOS 4.3 or later.
Cards are assigned to either a Speed, Tactics or Bruiser category, which gives them an advantage against other cards in different categories and also allows them to be combined to form “combos” that further increase their effectiveness in PvP battles. Players can also earn “mastery” over cards by using them regularly, which boosts their power even further.

Players without the console version of NBA 2K13 can still enjoy nine entertaining mini-games with this app. collection of basketball-themed mini-games in its own right. The clever bit is that playing this mobile version earns you virtual currency for use in the console edition, on PS3, Xbox 360 and Wii U.

Carmageddon is the original free form driving sensation, where pedestrians (and cows!) equal points, and your opponents are a bunch of crazies in a twisted mix of automotive killing machines. The game features anarchic drive-wherever-you-like game play and over-the-top surreal comedy violence. It’s the racing game where racing is for wimps.

action game with squishy, splatty and satisfying fruit carnage! Become the ultimate bringer of sweet, tasty destruction with every slash. Swipe up to EIGHT fingers across the screen to deliciously slash fruit like a true ninja warrior, taking in all of the crisp detailed effects which have been radically improved from the iPhone version. With two games modes in single player and worldwide leaderboards using Game Center, the addictive gameplay will keep you coming back for even higher scores.

Play Global Outbreak and help save humanity from the zombies!
Defend mankind from a killer virus spreading across the globe in this strategic and explosive top down 3D shooter!
Use the fully 3D tactical view of the globe to plan your strategy then control your soldiers in epic missions throughout the world.

Sonic Jump’s several-dozen stages and leader board-driven Endless modes are a great deal for $1.99 at app store. Having HD graphics.
Players can spend collected coins each round on power-ups like Ring Magnets, Shields, Second Chances and more. But these items take far too long to earn through normal play. Impatient or extremely competitive players can buy these boosts and use them to set high scores, eliminating the truly competitive nature of Sonic Jump’s leaderboards. 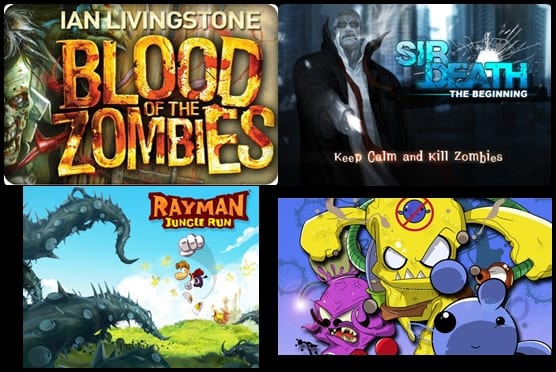 We’re really excited to say that the game is now available to download on both iOS and Android and ready to play
The colourful puzzle based game ‘Super-Fluid’ has been developed to work across Android and iOS devices and uses tilt-based controls for navigation through the levels as the character changes into three different states – solid, liquid and gas. The game’s narrative follows ‘Super-Fluid’s’ attempts to escape from its creators ‘Dynamisplice’, facing a variety of puzzles and challenges to navigate through each level, and get past enemies, including the Diabolical Jellies and Stalagbites.

“Insane megalomaniac Gingrich Yurr is preparing to unleash an army of monstrous zombies upon the world. He must be stopped and his undead horde defeated. In this life-or-death adventure the decisions YOU make will decide the fate of the world. Can YOU survive or will YOU become a zombie too?

Sir Death stands fearlessly, locked and loaded. Encounter and destroy a wide variety of zombie characters with your supply of weapons, skill sets, specialty items and an overpowering aura of cool. Get ready to blow out zombie brains in this intense, non-stop action RPG!

Android game Each of Jungle Run’s 40 levels is crafted to perfection and begging to be replayed in pursuit of that perfect run.
The simple joy of watching Rayman bounce and skip across your ‘android’s screen never grows old. 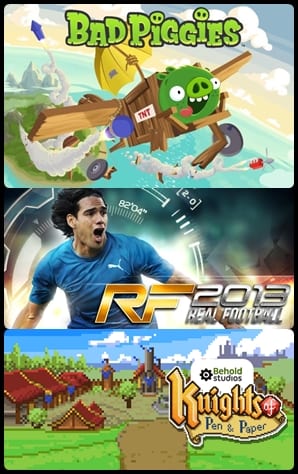 eveloped by Rovio, Bad Piggies is a sequel of sorts to the original Angry Birds. In it, players are tasked with assembling and navigating makeshift vehicles for the devious green pigs to gather eggs in. Gamezebo’s quick start strategy will provide you with detailed images, tips, information, and hints on how to play your best game.

then Real Football 2013 is the cynical percentage-playing clogger of iOS footy games. It’s virtually playing a different sport to the silky champion FIFA 13.
Gameloft’s football game has a hatful of licences, impressive graphics, and – new for 2013 – a deeper club development mode. It’s also freemium, which should make for some interesting competition with rival FIFA 13.

Play this game feels like you are playing a traditional pen and paper RPG. The player gets to control the playing characters AND the dungeon master, and you choose what battles to fight. Put together a bunch of monsters to make it a challenging fight and your rewards will be equally great!
Robbery Bob:
Play as Bob, the hapless burglar intent on changing his ways. Unfortunately for Bob, however, he’s going to be forced into a few final jobs before he’s allowed out of the criminal life.

While online gaming has taken off in Europe and holds potential for the U.S. should legal issues be resolved, other global markets also hold tremendous promise. A solid infrastructure of broadband Internet connectivity, easy access to mobile applications, and safe and secure payments through a native banking system are three of the key factors that could support this growth. Emerging regions such as India and Latin America are likely to be the next major markets to come into view for the industry
EA’s chief executive officer, John Riccitiello, said he believes the emerging online and mobile phone-based gaming business models will overtake traditional boxed products for video game consoles in the next coming years.