There had been a lot of leaks and rumors about Samsung Galaxy A6s. This smartphone is actually the part of newly expandable Galaxy A-series.  A few days back, Samsung Galaxy A6s appeared on TENAA revealing its some specs. After that, the Galaxy A6s got certified by the Wi-Fi Alliance. Moreover, Galaxy A6s WiFi Certification confirmed its outsourced production. Recently, Galaxy A6s Hands-on images showed up that revealed a range of eye-catching gradient colored variants.

Galaxy A6s is set to follow in the footsteps of Samsung’s newly launched devices. It will adopt a vertical camera module in the top corner of the rear just above the new dual-LED flash. The phone will come with a range of eye-catching colors. Samsung Galaxy A6s color options include three gradient colors and a black color. Let’s have a look at the hands-on images of A6s revealing its color options: 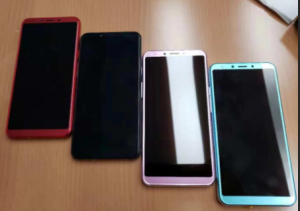 The smartphone will adopt an Infinity Display. All these models will make use of colored bezels matched with the aluminum frames. According to the TENAA listings, the phone was expected to run a 2.2 GHz CPU. However, according to the latest reports, Qualcomm’s Snapdragon 660 is expected alongside 128GB of storage. The storage variants will come with 64GB or 128GB of internal storage. Furthermore, the phone will have a vertical dual camera setup on the back with two 12 MP sensors. Also, the selfie lovers will have a 5 MP camera at the front.
The smartphone will sport a 3,300mAh battery that will keep the lights on. It will come with Android 8.1 Oreo straight out of the box. According to the rumors, the device may go official on October 24. Moreover, the Sales may commence towards the beginning of November. However, there are still no words by the company yet so we are not sure about anything right now.