Android Headlines has revealed a new render of upcoming Samsung Galaxy S9. It is a very reliable resource and Kepp on introducing Galaxy Note 9 Leak which is most authentic. This render is connected with previously leaked images of Note 9 screen protectors hinted phone’s face.

We already know that Galaxy Note 9 face looks identical to Galaxy Note 8. The only noticeable new thing in this device is that like other phone makers Samsung Galaxy Note 9 will not come with a notch. 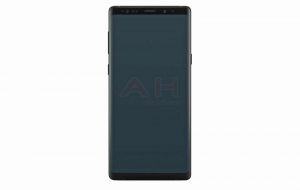 Many tech-savvy were expecting Galaxy Note 9 to come with a notch in the race of copying its rival Apple. If Samsung had incorporated with a notch, it would be for sure launched by Apple fans for copying iPhone.

It seems that Samsung is holding back premium features for the upcoming “tenth edition” phone, Galaxy S10. The Galaxy S10, is expected to release in spring of 2019. It is rumoured to pack five cameras–two front-facing lenses, with three cameras on the back like Huawei’s P20 Pro.

It’s good that Samsung will skip the notch in both of the devices. A great news has arrived via Korean publication “ETNews” that Samsung is going to reveal its new phablet Samsung Galaxy Note 9 on August 9. However, it has also been unveiled that Galaxy Note 9 will be launched in Korea on August 24. In other words, the phone will be available roughly two weeks after the reveal date.