Recently, a new leak showed up. The second confirmation came up from a famous leakster Ice Universe. According to the new leak, the fingerprint scanner for the Galaxy S10-series will be quite faster. It will be extremely better in performance than the currently existing optic ones. On the other hand, it will also occupy a larger area of the screen. Let’s have a look at the Tweet: 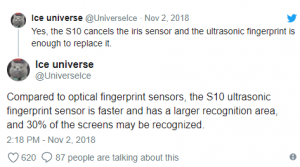 The ultra-sonic sensors capture a 3D image of your fingerprints without being interfered by other sources of light. They are very small in size and therefore, it’s necessary that you place your fingerprint on every specific portion of the panel. So, let’s see what exactly the Samsung will offer in this flagship series.
Samsung will launch three models of S10, one of which will be 5G compatible and will probably get UFS 3.0. Perhaps the Korean giant can do us all a favor and introduce the upcoming standard in its S10 series. S10 cheapest model will come with 64GB of internal storage, and as  UFS 3.0 will be offered in capacities of 128GB and up,  this model will not feature faster storage. According to the previous reports,  Samsung Galaxy S10 final color range will include more than six color options i.e; black, grey, blue, red, green, and yellow. However, we are still not sure about it as there are no official words by the company yet.