Wild Blood looks as good as any of the UE3 games that have come before. It’s pretty with its console-quality graphics, all shiny armour and giant boss creatures and lovely ground textures. Impressive giant boss fights fill the screen with unexpected spectacle. Visually the game is a delight.

Wild Blood is another take on the Sir Lancelot knight story where you have to assume the role of the legendary knight to face the hordes of evil and eventually King Arthur enchanted by the spell of sorceress Morgana. 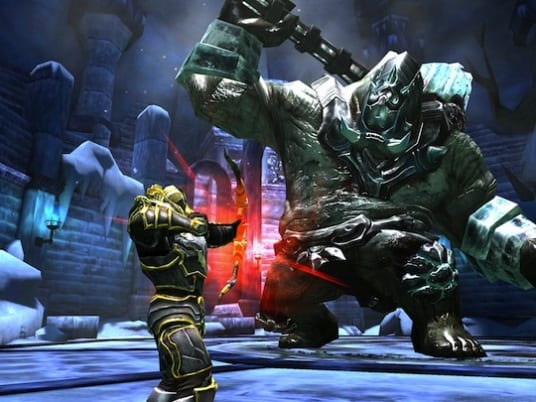 The game takes you through 10 challenging levels and puts all kinds of weapons from swords and axes to bows in your hands. It also comes with multiplayer Team Deathmatch and Capture the Flag modes.

Note: The Android version of the game is not out yet but is expected some time later this month.

It might seem as if I have been harder on this game than usual but that’s just because I expect big budget games from big developers selling for big bucks to be more than just console game rehashes. It’s time mobile game developers stopped looking at what the folks on the consoles are doing and started doing something new designed specifically with the touchscreen in mind.