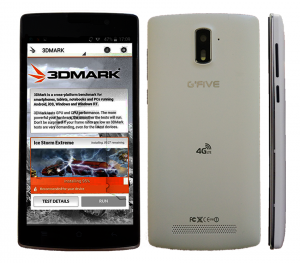 G’Five has launched their first device capable of supporting 4G with LTE technology, the so called GFive LTE1 Review. LTE is said to be the most advanced in terms of speed. LTE is claimed that is can download data at speeds between 5 and 12 megabits per second that is smooth enough for online streaming, live video and better response times for online multiplayer games. So G’Five is the best choice for this and company that stood first in launching new technology takes more advantage than the competitors in the row.

G’Five LTE is powered with Quad Core 1.3 GHz processor with model number MTK MT6582 and 1 GB Ram and with 8 GB Rom (can be extended with a micro memory card stick) which is a better combination with no or less compatibility issues. The environmental use period of the product is 20 years, although certain changeable parts may have a different environmental use period (e.g Battery unit module). The Operating System functioning in the product is Android 4.4 KitKat. The dimensions are 144 * 72 * 8.9 mm.

The internal interface is the same as do others smart phones have with Android as their operating system in them with a slight deviations in certain aspects as some sort of changes have been made to enhance the look and performance of the product. The interface looks cool with heart touching with dashing colors.

The built in browser is easy, normal and user friendly with three areas:

The interfaces used for both text and dialing are the standard ones. The color used in the dial pad is blue that fascinates the user’s look. The keyboard used is the standard one i.e the one used in almost every smartphone with the QUERTY standard. Consult the following snaps.

The settings also contains a button with a hand icon and a red point containing extra features including the word gesture, sentence gesture, auto correction, One-hand layout etc. Other settings consists of theme which contains certain types of keyboards with some different layouts, wallpapers etc.

Another features are in the camera section that consists of quick buttons for beauty, normal and panorama pictures. The product contains of dual cams, the rear of which is 8 Mega Pixels supported by a flash light and the front camera is 2.0 Mega Pixels. The panoramic as well as the normal layout inside the rear camera being turned on is shown in the pics below.

Benchmarks that show the overall performance of the device and their results are shown below:

The overall performance of this product through Antutu with the competitors world wide are as under.

Vellamo is a bench mark that shows the performance of single core, multi-core and the browser and then benchmark them to show the rankings with other competitors in the group. The snaps are shown below.

The proceeding graph shows the overall performance, its mark and the points it gained with Vellamo.

Testing the graphics in GFive LTE1 Review with 3D Mark:

3D Mark is a cross-platform benchmark for smartphones, tablets, notebooks and PCs running Android, iOS, Windows and Windows RT. This bench mark tests the GPU or the graphics processing unit of the devices and benchmark them as well. With the 3D Mark, the overall score that the G’Five LTE made is 2115 which is satisfactory.