“We think of it as a conversational assistant, on-going two-way dialogue with Google. It will help things get done in the real world,”

It is not clear when Google Assistant will roll out for users.

Google Home is the Assistant-powered speaker device,  which will stream music, entertainment videos from the cloud, and handle everyday tasks for users. Just like Amazon’s Echo, users can speak to the device via Google Assistant.

The WiFi-based speaker can stream music directly from the cloud, let users control other speakers in their home, control their Smart Home networks including lights thermostats, etc and has support for Google’s Nest. In the future, Google Home might be able to order food, book flight tickets for users.

Google Home will be available later this year, and the pricing has not been confirmed. 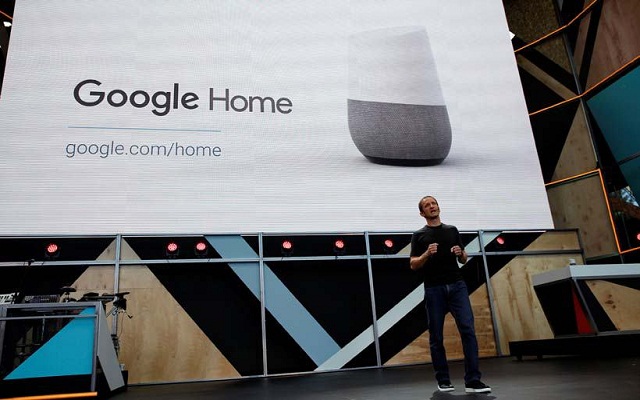 Allo is a new intelligent messaging app for Android and iOS, based on machine learning, computer visioning, and assistive technologies.

Allo has features like Expressions with Whisper and Shout, where users can either make the text appear really large (for shout) or really small (for whisper). Users can also add text on photos sent on Allo, which Snapchat currently offers.

It will even offer smart replies when someone sends a photo, and builds on Google’s Photo capabilities to understand context and chooses a reply based on the exact image. It creates a conversational response, like say ‘Yummy’ to a picture of pasta.

Duo will be available this summer.

Google says the response to the Android N Developer Preview has been overwhelming. Also the company is inviting entries from users to send suggestions for ‘dessert’ name for Android N.

In Android N, Google has introduced Vulcan API to give game developers direct control of the GPU to improve high-end graphics gaming.

Android N gets a split-screen called multi-window view for tablets, phones and a new window-in-window features on Android TV that lets users watch something, while continuing with another task.

Virtual Reality also gets a big push in Android N with a new DayDream platform, which will launch this Fall.

DayDream is Google’s platform for high-quality, immersive mobile VR experience on Android smartphones. Google is looking at the whole VR ecosystem; from smartphones which have the right specs and are ‘DayDream’ ready, to VR headsets to apps.

Android Instant apps will work, without the need to download the app.  Based on the demo, when a Buzzfeed video Link appears, Google Play fetches only the ‘part’ of the app that is needed at the moment and starts playing the video or link in the app. So the user is not required to download the app, and gets an “app-like” experience.

Android Studio 2.2 is to help developers run their apps faster (10x) with the ability to deploy changes, even in a running app.

The Emulator and push speeds are faster, and it will benefit developers who want to quickly push out their new apps. It also includes the ability to record test code as well, APK analyser, a new Layout inspector, and expanded Android code analysis.

Google CEO Sundar Pichai spoke about how Machine Learning is changing and improving at the company.

“Last year, we open sourced TensorFlow so that developers can embed machine learning with a single API. It is the number one machine learning project on Github. We also opened a natural language system, which is built on TensorFlow, ”