Google has brought Where’s Waldo? to Google Maps, which has started yesterday and is continuing on for the next week. you will find Waldo pop up in his signature red and white stripes and will give you a friendly wave on Android, iOS, and the desktop.

To play Where’s Waldo? you have to just tap or click on him and you will find the option to play a game that’s straight out of the classic children’s puzzle books. This new feature has rolled out by Google on annual April Fools’ Day, but the game is actually available on Google Maps.

However, along with Waldo, you will also find his friends like Wenda, Woof, Wizard Whitebeard, and the villainous Odlaw.

Once you find Waldo you can go to a new location, with a new picture, the map screen will provide the new place instead of asking you to find it. Google said that there is also a Google Assistant component to this campaign, you can simply ask “where’s Waldo?” on a Home speaker, Chromebook, or Android smartphone. 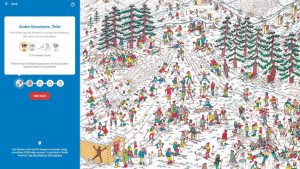 Few weeks ago Google added Mario Kart to Google Maps before that we have seen Pac Man playable in map screens. We have also even seen Pokémon hiding inside the app in 2014.

Read Next: A Return of Home button in Google Chrome for Android