Google keeps on introducing new changes in order to provide an improved user experience. A few days back, we came to know that the company will not rely on third-party apps anymore. It will now allow users to set their own default list and note taking provider in Assistant using Web App for Lists & Notes. Recently, we came to know that Google is working to remove and replace Android Voice Unlock. Google Android Voice Unlock Feature is being slowly depreciated.

Google’s “Unlock with Voice Match” feature allowed users to have their voice act as a phone passcode. After hearing your command given to Google Assistant, the phone authenticates that it was you and performs accordingly. However, this feature is very less secure because a similar voice or recording of your own voice could unlock your device. So, Google is planning to remove this feature and replace it with a more secure one. The Google App version 8.39 for Android revealed this change by stating that:

“The Voice Match to unlock feature you’ve been using has been replaced with a more secure way to get personal results while your device is locked. You can change this in your Assistant settings.” 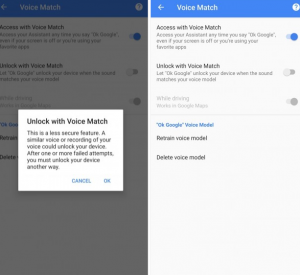 Google has already replaced this feature with “Lock screen personal results” on the Google Pixel 3. So, it is expected that Google is ultimately going to replace Unlock with Voice Match in the future. However, it is not enabled on the Google app 8.39 version. It may come in future versions or via a server-side update. There are still no words by the company that when will this feature be enabled for all devices.