Google keeps on making its platforms better and reliable for users, and this time it has done a makeover of Google Assistant that makes it look better on Android devices. Right now, whenever we ask Google for something, it shows results by giving some cards, posting web results, opens an app, and also gives text responses in a dialogue balloon. While everything will remain the same, Google is changing the dialogue balloon having small text with a large bold print so that it can be read easily by everyone.

Some of the users have reported that they have received the text responses in bold print instead of tiny text on dialogue balloons. Many people do not want to hear the assistant, so this change would be quite useful as it will show a bold response instead of the shrinky gray one shown before.

The below picture shows the old response in a balloon with a dull writeup. Whereas the right one shows the updated look with prominent, bold, and large text. 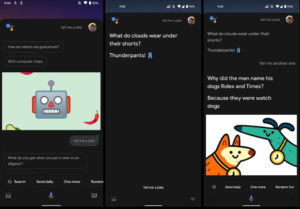 No doubt, it is a good a change for people who have visibility issues and for older ones who cannot easily see dull writeups. This music needed, small change is quite useful.

This makeover was spotted in the latest updated version of the Google app in the Play store. So if you have not received this till now, you can update the app.

Google assistant usually do not pronounce your name and its a kind of funny pronunciation that come from it. Now you can teach it to say your name with the right pronunciation, click here to know how.