Facebook is no longer the top site for referral traffic, as it has lost its spot as the top external source of traffic to publishers. For reader’s information, social referrals are links that are shared on social networks such as Facebook and Twitter. These links are crucial source of incoming traffic. Google Beats Facebook to Become Top Referral Source For Publishers.

According to new numbers from the traffic-analytics service Parse.ly, Facebook is no longer top site for publishers but Google has overtaken it by a significant amount. Digital analytics firm Parse.ly has reported, that actually Facebook was not on top for all that long but just for couple of months. 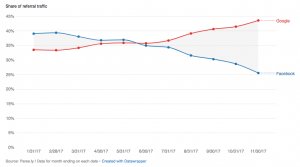 “Our data indicates that Facebook Instant Articles replaced the existing user experience; it didn’t grow overall referrals from Facebook to media content in our network. “Google AMP, on the other hand, has been steadily increasing, along with overall Google referrers.

There must be so many reasons of Facebook’s decline but some are so obvious like “Instant Articles” feature of Facebook, where the service hosted some publishers’ content directly but promised to send more readers to the original site as well.