The search engine giant Google has created doodles on its homepage dedicated to the four teams of ICC T20 Cricket World Cup 2016. Doodle is showing the cross of bats like swords indicating the real clash among the four teams including Pakistan vs. Bangladesh and India vs. New Zealand.  The Google doodle seems to be very active and reminding all the cricket fans to stay tuned for the favorite team matches. 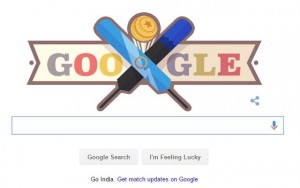 The match between India and New Zealand is expected to start at 7:30PM (IST) in Vidarbha Cricket Association Stadium Nagpur. India is considered favorite to win the match and as it has recently delivered a great T20 performance against Australia and in the Asia Cup.

Pakistan will take on Bangladesh in the Group 2 fixture of the 2016 ICC World T20 at Eden Gardens, Kolkata, on 16 March. As we all know that Pakistan has finally made it to India after their participation in the T20 World Cup was in doubt due to security concerns. Pakistan has won the warm up, match from Srilanka so fingers are crossed for its performance with Bangladesh.

For checking live scores you can always head to Google. Clicking on the Doodle itself will reveal the latest score to you.