Google Lens is a widely used app throughout the globe. Keeping in view the growing popularity, Google is redesigning its lens app for Android, keeping emphasis more on the screenshots and images in the camera roll instead of the viewfinder.

In order to access features in the new interface, users need to tap on the Google lens icon from the home screen and the top third of the screen will have a feature named  “Search with your camera”. This feature allows Lens users to examine what their camera sees.

If users want their lens to find out something from the camera roll, they need to swipe down or return back to Google camera-related UI.

Moreover, the bottom corners on the camera apps are now curved to add a better touch to the design. 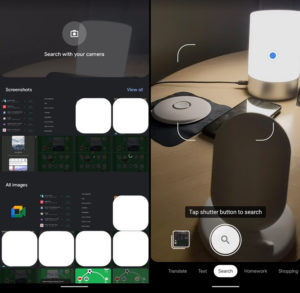 It seems like Google has suddenly decided to change the interface for bringing good changes in Lens. The primary reason behind it seems to shift the focus from live shots to camera roll.

Initially, the company had prioritized live analysis from the camera, but now it has realized that all the interesting things that would be posted on Google lens will be initially photographed. As users were not able to take pictures on the app, this functionality is also added for the very first time.

The update is rolling out for version 12.26 of the Google app after a server-side update. Currently, the redesign is launched for Android users only which means iOS ones will have to wait longer.