Google Maps app will start to guide drivers about “Eco Friendly” routes, the company revealed on Tuesday that to control the traffic carbon pollution, slopes, and other factors Google has taken this step to play its role against climate changes. The function will be initiated in the United State later this year by Google and ultimately will enter other countries in order to contribute to the fight against climate change through its services.

Without users asking, Google will firstly guide the drivers “eco-friendly,” route as default if the comparable road takes the same travel time, Google stated. Google offers options, which allows users to compare estimated pollution when the alternative is considerably faster. 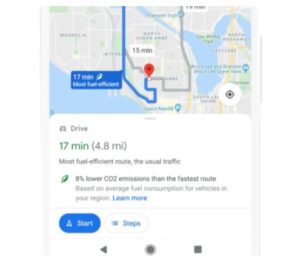 “We are seeing a more environmentally-friendly option on around half roads, with minimum to no time-cost tradeoff,” said Russell Dicker, Google’s product director.

Google says that it extracts relative figures of pollution by testing various vehicle types and routes based on insights from the National Renewable Energy Lab of the US Government (NREL). Data from the road grades were obtained by Street View cars and satellite and aerial images.

The possible impact of this feature on pollution is uncertain. But last year, 20 researchers at California University found that participants were more likely to consider pollution in road selection. So, Google considers that point and tries to put its efforts to control pollution.

Additional climate-focused changes are included in Google’s announcement. From June, drivers can warn of travel in low-emission areas where some vehicles in Germany, France, the Netherlands, Spain, and the United Kingdom are restricted.

Over the coming months, the users of Google Maps applications will be able to compare vehicle, the car, truck, public transport, and other choices instead of switching between various sections.

You may be also interested in: Google Maps New Feature will Allow Users to Modify Missing Road Information