The newest feature of Google Messages is expected to allow customers their messages to be scheduled. Some users are supposed to use this feature, and the new Google Messages APK already consists of code for this feature, according to a source. After typing a message, customers will choose the time and date they wish to deliver the messages. Users may choose to pick out a personalized date and time from one of many predefined scheduling instances. It must be known that the scheduled messages have not been released to all customers yet.

Sai Reddy (@besaireddy) posted the brand new characteristic of the google messages on the website. Customers must press and maintain the Send button after drafting the message to schedule messages on Google. This will convey up the brand new schedule messages choice. Three default times seem to be available to customers: “Later today, 6 p.m.,” “Later tonight, 9 p.m.” or “Tomorrow, 8 a.m .” However, it appears to be available to choose customers and hasn’t been widely rolled out. 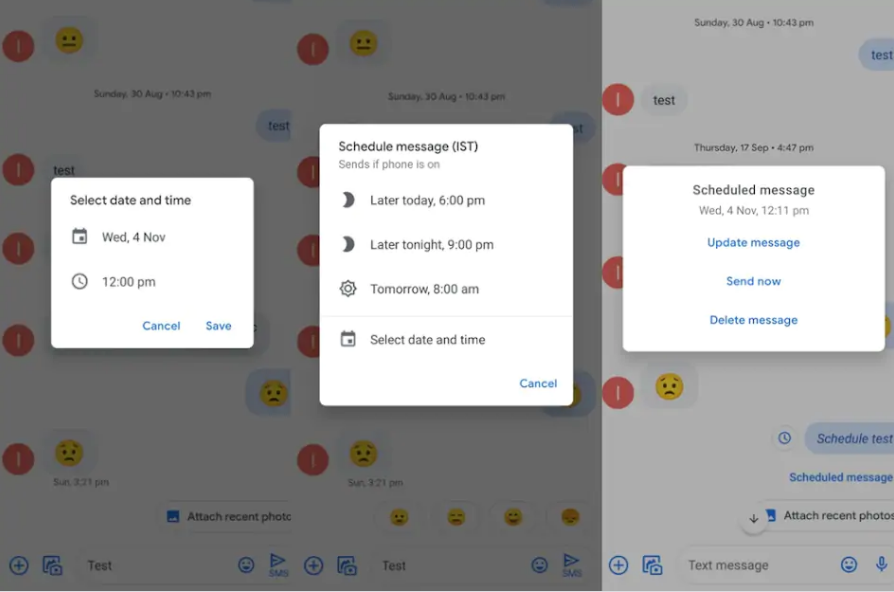 You can do so by selecting and customizing your chosen date and time if you do not want to plan your messages on the pre-set time or want to pick another day. Then click Save to set the Google Text schedule.

You should click on the message, whether you want to change the message or the time it is scheduled to be sent. A pop-up menu allows you the ability to replace, ship, or fully erase the message. It is still in the test process and hasn’t been carried out for all the users. Google may roll it out for more users in the weeks ahead, especially since the latest Google Messages APK contains code for this feature, as spotted by XDA Developers.

You may also be interested in: Get Old Google icons back with Google new Chrome Extension.