Google has the habit of giving tributes to well known and excelling people from every field. Today is 91st birthday of Pakistani Singer Noor Jehan. Search engine Google has payed tribute to the Pakistani legend with a beautiful doodle. Google Pays Tribute to Legend Noor Jehan through Doodle on her 91st Birthday.

The late melody queen has ruled the hearts of millions of people in Indo-Pak subcontinent. Noor Jehan, better known by her honorific title Malika-e-Tarannum, was a Pakistani singer and actress who worked first in British India and then in Pakistan. Her career spanned more than six decades.

Madam Noor Jehan was born in a family of local musicians in Kasur Punjab. She began her singing career when she was just five years old.

She won many hearts before partition. After partition she moved to newly independent state Pakistan. However due to huge demand of her touching songs, her voice continues to endear her to million hearts across the subcontinent. 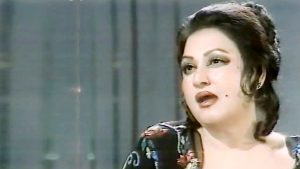 Her Patriotic songs gave courage and confidence to many Pakistani soldiers during their hard times and Indo Pakistan war of 1965. Her song “Tumhain Watan Ki Hawaei Salam Kehti Hain” still brings goosebumps to many people.

Noor jehan was awarded the Pakistan President Award by Gen. Ayub Khan in 1965 for her acting and singing capabilities. She also recieved civilian awards “Tamgha-e-Imtiaz” and “Sitara-e-Imtiaz”.

She took her last breath on 23 December 2000 (night of 27 Ramadan) due to heart failure. Today Doodle narrates Noor Jehan’s unique style via cartoon picture. Her chin tilted up, her hand flung out, a choker at her throat and a flower in her hair.