Google Pixel 3 Lite has spotted recently in Hands-On Images. The phone has thick bezels as we found in the last year’s Pixel 2.  Moreover, it has found that the phone comes with a 3.5mm headphone jack that was dropped from the Pixel family last year. 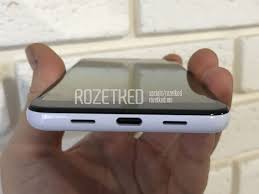 Russian site Rozetked has leaked some hands-on images of the Pixel 3 Lite with its key specifications and launch schedule. The design of the smartphone is similar to the Pixel 3. It has the volume rocker and power button on the right. This new handset doesn’t have a notch, and the bezels of the display panel aren’t as pleasing as the thin bezels of the Pixel 3 XL.

SIM card slot is present on the left of the smartphone while the 3.5mm headphone jack is present on the top side. Other than that, you will find components such as the loudspeaker, USB Type-C port, and a microphone grill at the bottom.

Camera sensor and a fingerprint scanner are present at the back of the phone. The back panel is made of plastic.

According to the rumours, the smartphone comes with a 5.56-inch full-HD+ (1080×2220 pixels) IPS display along with an 18.5 aspect ratio and 444ppi of pixel density. It will run on an octa-core Qualcomm Snapdragon 670 SoC, coupled with Adreno 615 GPU and 4GB of RAM as well as 32GB of onboard storage. The Pixel 3 Lite to carry a 12-megapixel rear camera along with an LED flash, 8-megapixel front camera. The powerhouse of the phone is fueled by a 2,915mAh battery.