We had been getting a lot of information regarding the upcoming two mid-ranged Google Pixel Phones. The upcoming flagships, Google Pixel 3a & Pixel 3a XL had been in the pipeline of rumors since the past two months. We had also got our hands on some official renders of the handsets as well. Recently, Google Pixel 3a new Render surfaced on the web.

The latest render of the handset shows the same design as that of the Pixel 3. The company will make the power button orange instead of mint green as on the Pixel 3. Apparently, there is no difference between the Google Pixel 3a and its predecessor. However, we hope that the company would make the upcoming handset stand out somehow. @evleaks has just posted what seems to be an official render of the Pixel 3a. Let’s have a look at the render. 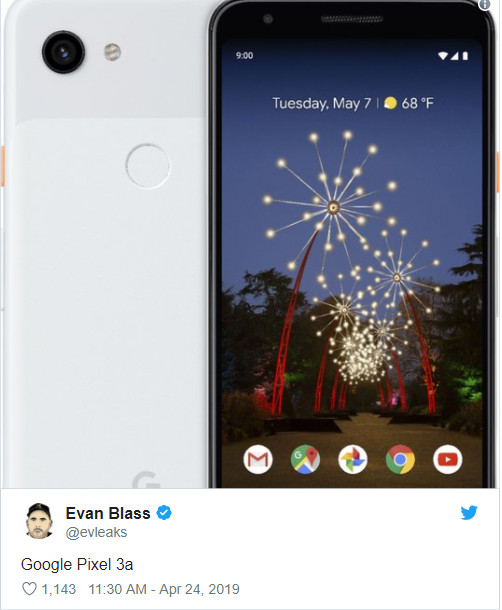 The Pixel 3a and 3a XL will follow the same design according to the renders. Both smartphones will boast large bezels. In addition to that, the handsets will have a headphone jack at the top together with a USB-C port at the bottom. Both phones will come with 4GB RAM. However, the regular Pixel 3a will sport a 5.6-inch display whereas the other one, 3a XL will boast a 6-inch panel. Pixel 3a and 3a XL were also spotted at the Google Play Console with codenames “Sargo” and “Bonito,” respectively. According to the info revealed, both Sargo and Bonito will be powered by Snapdragon 670 SoC and Snapdragon 710 respectively. However, the former will have a screen resolution of 1080 x 2220 px and a pixel density of 440 ppi while the latter will be of 1080 x 2160 resolution and 400 ppi.

The upcoming Google Pixel Phones are expected to make their way to the market on May 7. Let’s see what comes next ahead of their launch. Till then stay tuned for updates.