Google Play store always contain some sort of scam apps which contains different types of viruses. Researchers at Avast discovered the campaign, naming it ‘UltimaSMS,’ and reported 80 associated apps that they found on the Google Play Store. A massive fraud campaign utilizing 151 Android apps with 10.5 million downloads. These apps were used to subscribe users to premium subscription services without their knowledge.

How These Apps Works?

These apps pretended to be discount apps, games, custom keyboards, QR code scanners, video and photo editors, spam call blockers, camera filters, and more. When launching one of these apps for the first time, they use data from the smartphone, like the location and IMEI, to change its language to match the country.

The app would then prompt the user to enter their mobile phone number and email address to access the program’s features.

Having the phone number and the required permissions, the app then subscribes the victim to a $40 per month SMS service from which the scammers get a cut as an affiliate partner.

Avast’s analysis reveals that the authors of these apps have implemented a system that charges the victim the maximum possible amount based on their location.

Although most of these apps don’t offer the advertised functionality, and despite the numerous bad reviews they had on the Play Store, their creators are still finding success through the sheer volume of submissions.

By using such a large number of apps for the ‘UltimaSMS’ campaign, the scammers maintained a constant influx of victims and preserved their presence on the Play Store despite the constant reporting and take-down action by Google.

According to Sensor Tower, the most affected countries are Egypt, Saudi Arabia, Pakistan, and the UAE, all counting over a million victimized users. In the U.S., the number of infected devices is 170,000. 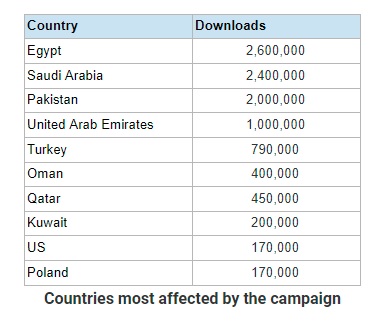 What should UltimateSMS victims do?

While uninstalling the app will prevent new subscriptions from being made, it will not prevent the existing subscription from being charged again. To avoid future charges, you need to contact your carrier and ask for a cancellation of all SMS subscriptions.

You can review this list on GitHub for a complete list of the apps you should remove immediately from your device.

To avoid falling victim to scams of this kind, ask your carrier to disable the premium SMS option for your account and avoid entering your phone number on apps that would not need this information.

It is also strongly advised that you read reviews before installing an app, and if there is repeated negative feedback, avoid the app altogether.