The Google Mobile site revamp is now launched for Android and iOS users which are logged in via their Google Account. Google has used the curved UI design  that the company was reportedly testing.

The primary search box on the Google’s mobile homepage has now curved edges. When you pop in the redesigned Google web you can see several curves coming on your way. These are the category tabs that includes ‘Top Stories’, social, related searches, search suggestions, weather, sport results, and many other carousel cards. 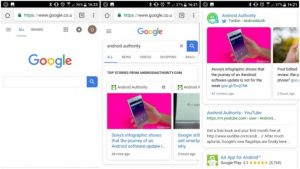 These designs have been in testing for the past several weeks, frequently visible when performing a search in Incognito Mode. However, beginning this afternoon, the new interface went live for those signed into their Google accounts.

The Google Web redesign is rolled out across all mobile platforms in almost all regions. There are rumors that google will also revamp its Google App which not only includes rounded cards and search bar  but also shifts the hamburger menu to the bottom navigation bar.