Google has officially announced its next major version of Android, known as Android 9 Pie. Yes, Google calls it Android 9 Pie. The update is ready for download on Pixel devices, followed by devices from Sony Mobile, Xiaomi, HMD Global, Oppo, Vivo, OnePlus, and Essential by the end of the fall.

Android Pie is the successor to last year’s Android Oreo and the ninth major release of Android. The update brings several new features for users. It comes with machine learning to make your phone smarter.

One good feature which is introduced by Android Pie is Adaptive Battery, that figures out which apps you use less and cuts off resources to them in order to make your battery last longer. Moreover, an another feature called Adaptive Brightness can automatically adjust the display brightness to your current location and what you are doing on the device. No doubt, it sounds amazing!

Another major feature is is App Actions, that insert quick actions based on your activities within the app launcher at certain times of the day.

Android Pie brings new system navigation. At the bottom, three buttons are now replaced by two, with the Overview mode. 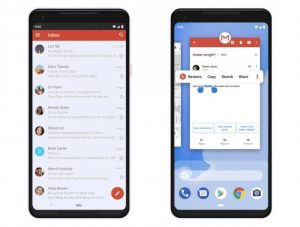 Now you will see that in the new update, notifications have also been updated, with new circular icons. You will also observe expanded previews for messages with smart reply options.

According to the Google, Android Pie also offers support for the latest edge-to-edge screens with a cut-out for the camera and speaker.

Moreover, you may enjoy features like Digital Wellbeing and Do Not Disturb in future.

Read Next: Android P Release Date Revealed in a Leak