Google assistant is one of the widely used features and its usage has not only made our lives easier but has also acted as a fun-filled activity in our lives. Trust me or not, my four years old son download multiple games from the Google Play Store himself (which is not a good thing of course), by just giving a voice command. So its popularity can be analyzed by this aspect that it is used throughout the globe irrespective of the age barrier. Through this, one can scrutinize the number of downloads of Google Assistant’s Android version.

When we open the app to download it, we see a note saying that if our device already has an inbuilt Google assistant (which most of the android devices already have), we do not need to download the app. Still, Google assistant’s Android app has got 50o million downloads. isn’t it amazing?

This number does not include the iOS users who are fed of using the flop assistant Siri and use the Apple app store to download the google assistant app, so in this case, the actual number of downloads is even higher. 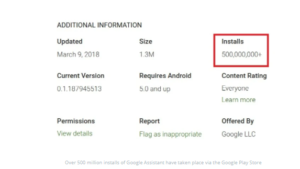 While the assistant is already available on most Android devices, but downloading the app from the Play store gives the assistant place at the app drawer or home screen. Though users can also activate the assistant by giving voice commands. Saying the phrase “Hey Googe” is the most easiest way of waking the assistant up without squeezing or tapping on the icon.

Previously Pixel device owners were given the liberty to activate the assistant by squeezing the sides of the assistant. This functionality was later on removed in new models.

Reaching 500 million Google Assistant installs, Google Play Store is just halfway to reach billion and will get there sooner than expected.