[blockquote cite=””] Hackers, who identify themselves with the hacktivist group Anonymous, claimed to have acted against 31 websites of the government in response to the violence against protesters.
[/blockquote]

However, some other websites of the government which the hackers claimed to have attacked included the website of prime minister’s office (pmo.gov.pk), the ministry of finance (finance.gov.pk), the press information department (pid.gov.pk), Federal Investigation Agency (fia.gov.pk).

[blockquote cite=”Hacktivist”] We are cataloging the atrocities being committed in Pakistan. We will begin at once assisting the peaceful protesters in Pakistan with every tool and tactic at our disposal. And we will initiate the process of removing every vestige of the Pakistan government from the Internet and shutting down their communications network.
[/blockquote] 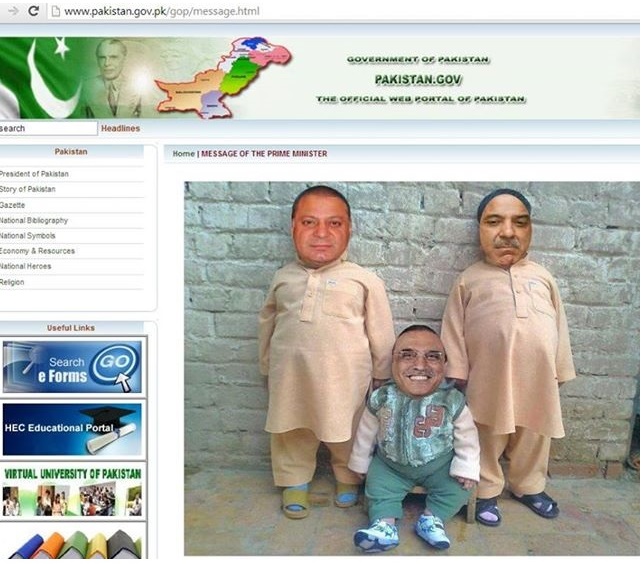 Website of the ruling party, Pakistan Muslim League-Nawaz, was also inaccessible, though unlike the other websites, one received a message of maintenance when trying to access the site. The group also claimed to attack the business website of Sharif Group (sharifgroup.com.pk), the company owned by Nawaz Sharif and Shahbaz Sharif.

Other government websites taken down include Pakistan Meteorological Department (pmd.gov.pk), National Institute of Electronics (nie.gov.pk), the e-government service repository of forms (forms.gov.pk) and the Pakistan Institute of Manpower (pmi.gov.pk).

[blockquote cite=”A message left by hacktivist on website”] Prime Minister Nawaz Sharif, it is to late to Expect Us
[/blockquote]

Other sites which the hacktivist group targeted were that of the Army and the Airforce. The hackers claimed to have taken down the ISPR’s website (ispr.gov.pk), the Army (joinpakarmy.gov.pk) and the Airforce’s (joinpaf.gov.pk) recruitment websites.

Separately, hacker Muhammad Bilal and the Pakistan Cyber Experts team hacked into four sub-domains of the Punjab government website and left their message there by altering the configuration files. “If you cannot secure your websites, then why do you create them?” read the message.