Yesterday, the mobile phone of Justice Qazi Faez Isa has been hacked, confirmed by the Supreme Court of Pakistan.

Shahid Hussain Kamboyo, Top court’s spokesperson, said that there is “suspicion that misguiding communication can be made from his lordship’s number to anyone with ulterior motives”. 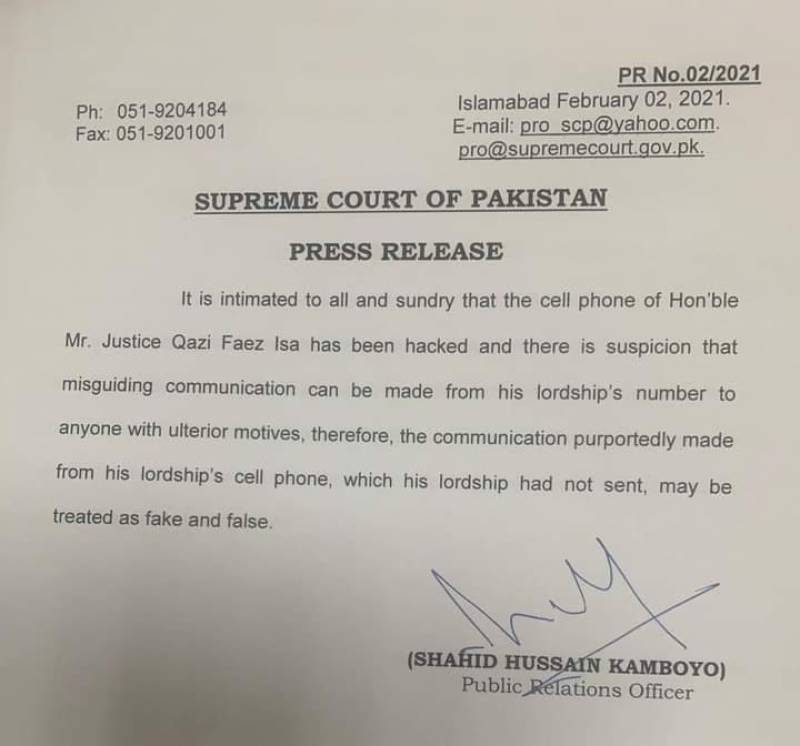 The spokesperson further added that the communication has been made from his “lordship’s cell phone, which his lordship had not sent, may be treated as fake and false”.

Well it is not the first time that the cell phone of any VIP has been hacked. In past, we heard a lot about the hacking of the cell phones of eminent personalities. But the positive thing was that authorities have issued warnings against opening any messages from unknown numbers. Still, authorities need to take appropriate steps and design such policies that can at least reduce the ratio of the hacking in the country.

Earlier in August 2020, the country’s intelligence apparatus identified a major cyber-attack by Indian intelligence agencies which was confirmed in a statement issued by the Pakistan Army.

According to the reported incidents, “the target is likely to receive a message from a friendly contact asking them to share a code that the target may get from a variety of other sources.”

However, the family of the judge didn’t share a word on this development with media. Even Sarina Isa is also reluctant to say anything about this incident at this moment.

The FIA officials said that the technical team of FIA, consisting of forensic and cyber experts, would identify the hackers, their reasons and modes of hacking and possible leakage of phone data (emails, messages, etc).