Samsung is expected to launch several devices on October 11, 2018. The tech giant will announce the most rumored Galaxy A9 Pro with four cameras having snapdragon 710.  The Korean company is also expected to launch Samsung Galaxy A7( 2018) with Three Cameras. Today, we have got  Leaked Pictures of Samsung Galaxy A7( 2018) with Three Cameras.

Leaked Pictures of Samsung Galaxy A7( 2018) with Three Cameras 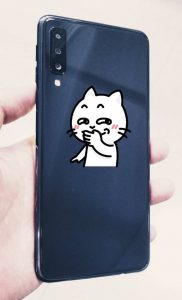 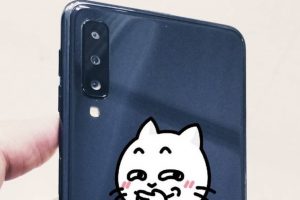 The benchmark listing from way back in July listed the Exynos 7885. If Samsung was indeed preparing a successor to the A8+, it would presumably include the newer Exynos 9610.

We still don’t know much about the design of the upcoming smartphone. Reportedly, the handset will feature an Infinity Display.

After viewing this image many previous rumors of  Galaxy A7 (2018) resemblance with Galaxy A9 Start are confirmed.  The verticle camera module will be placed in the top left corner of the rear panel. Inside this module, there are three rear cameras. This would be the Samsung’s first device with triple camera setup.

Right now the purpose of each sensor is not known but the trend of the triple camera in smartphone market shows that one will probably ship with a telephoto lens to help with zooming and bokeh images.

In addition to that, the upcoming Galaxy A7(2018) will sport 4GB of RAM that will be presumably coupled with 64GB of internal storage. Moreover, Android 8.1 Oreo was listed for this phone. Samsung will hopefully update the software ahead of release as Android 9 Pie got released last month.

The company has not revealed any pricing information. Moreover, we have to wait until the company makes an official announcement for the launch of the phone.