As the Rape rate in India is very high, a 17 year old boy from Telangana invented a unique device for the first time which can prevent Rape. His name is Siddharth Mandala. Here is a Device Which can Prevent Rape: ElectroShoe.

A very famous, Dehli Rape incident took place when he was 12 years old. He joint his mother in the march of Nirbhaya (fearless) with 500 people to support the victims family. It was that time, he built the hatred for rapists and decided to fight the situation somehow.

Here is a Device Which can Prevent Rape: ElectroShoe

He invented a patent pending device and named it as ElectroShoe. The device ElectroShoe is a product for women which can electrocute perpetrators of crimes.

ElectroShoe gives electric shock to the rapist rapidly by inflicting 0.1 Ampere of electricity. It also sends and alarming alert message to the cops and family members. 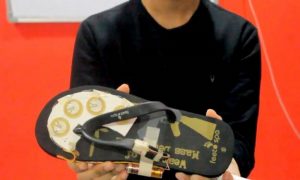 This device is incorporated with unique circuit board that uses footsteps to charge itself using the concept called “Piezoelectric effect“. The more wearer walks, more energy is stored in a rechargeable battery and generated.

This is a very positive step and perfect device for women. Every women should use it to prevent Rape. However Sidharth should work more on its design and make it available in market.