Xiaomi is currently working on new device and soon it will launch this new device which is currently called Pocophone F1. However, the name is not confirmed and that can be change at the time of launch. First Xiaomi Pocophone F1 was certified for Bluetooth connectivity and then popped up on AnTuTu. Recently, a Belarusian site leaked some specs, and now a first image Xiaomi Pocophone F1 has surfaced in Romania, that gives bit different sheet of specs.

According to Romanian retailer PC Garage the Xiaomi Pocophone F1 is expected to have Snapdragon 845 with octa-core CPU and Adreno 630 GPU. 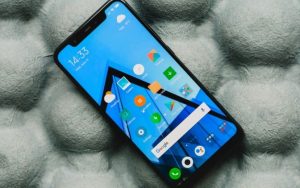 The phone will have RAM of 6 GB, while storage is 64 GB with a slot for microSD in the hybrid SIM slot. This upcoming device camera section will have setups of 12 MP + 5 MP on the back, 20 MP on the front.

Belarusian site reported that Pocophone F1 will feature 6.18” Full HD+ screen but the Romanian site, which leaked first image Xiaomi Pocophone F1, says that the phone will have 5.99” IPS panel.

The new listing also includes a price tag of RON1,999 which is equivalent of €430/$500. It is to be expected that device will feature one of the cheapest Snapdragon 845. The leak suggests that the Xiaomi Pocophone F1 will feature 4,000mAh battery but there is no word on a 3.5mm jack.