We kept informing you about each and every leak of LG V35 ThinQ time to time. Now it’s time to show you the first image which is appeared on the Wireless Power Consortium website. 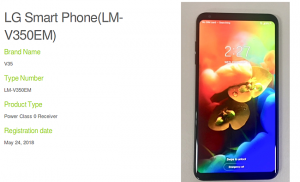 LG V35 ThinQ is expected to come with 18:9 aspect ratio having no notch. Moreover, the device will have a 6.1-inch LCD display.

We can’t say anything in detail about the internal specs of the LG V35 ThinQ yet, but we can share some leaked information about the specs.

It has been rumored that the LG V35 ThinQ will come with a Snapdragon 845 chip, 6GB of RAM, and twin 16MP rear cameras with an f/1.6 aperture and HDR video recording.

The front-facing camera will have almost the same features as we found in G7. It will come with an 8MP sensor, a much-needed upgrade over the poor-performing LG V30 5MP selfie shooter.

It seems that this will be the device from LG V-series that you were really waiting for. However, the launch of LG V40 may not be too far. LG has recently launched the V30S for their users. LG is in a mood of releasing a variety of devices for their lovers in 2018.