QMobile is a Karachi based consumer electronics company which markets smartphones in Pakistan. Furthermore, it is the largest smartphone brand in Pakistan with an estimate of one million mobile phones sold monthly. Moreover, QMobile’s range of devices includes some tablets and dozens of phones including the touchscreen, QWERTY, WiFi all running Android OS. However, QMobile does not manufacture mobile phones. It imports phones from vendors in China and sells them under its own brand. Recently, we have got our hands on the latest QMobile price list 2018 that contains the prices of all phones of the company including the bar phones, Dual series, the Q Infinity series etc.

The Qmobile bar phones are quite cheap. They mostly come with 2.4″ display. The range of their battery capacities is 1000mAh to 5000mAh. Let’s have a look at the price list of the bar phones: 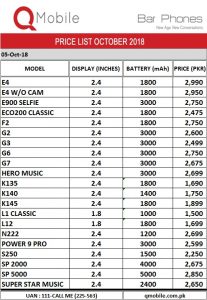 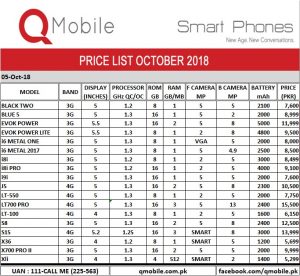 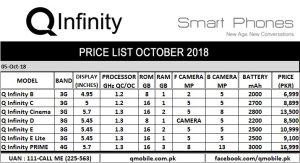 The Qmobile dual series only include two phones. The Dual One and E3 Dual having price of 8,500 and 14,999 respectively.

All the phones mentioned in the price list are quite budget-friendly. The range of the phones lies between Rs 1500- Rs 16,999.