Having fast internet really means a lot these days as internet has become a fundamental facility in our daily lives. When it comes to faster internet, everyone wants to know the the regions on top. Here is the List of Top 10 Countries With Fastest Internet. 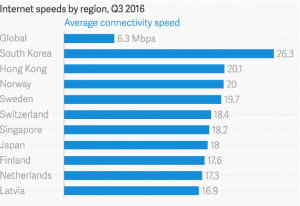 So who is the winner? The chart above shows that winning countries are South Korea. This result is extracted from the report “State of The Internet“; which is written by Akamai and is released last week. It reviled that South Korean countries enjoy the fastest internet service in the whole world. It has highest average speed in world with 26.3 Mbps average showing 28 percent increase over an year.

Here is the List of Top 10 Countries With Fastest Internet

Countries like Hong Kong and Singapore have also come up to the top 10 list of highest internet speeds in the world. The reason behind such high position is that they actually have 100 % urban population. According to Akamai report Singapore has jumped abruptly in connection speeds at increase of 5.3 %.The global average connection speed rose 2.3% from Q2 to Q3 2016, landing at 6.3 Mbps.

Out of utter surprise US couldn’t even fix themselves in top 10. According to FCC report millions of american are still stuck with less than broadband speeds. America being a big country with very old infrastructure and not being able to meet competition is some what very shocking.

However Akamai said that United States figure of 16.3 Mbps internet is a 6.8 % increase over last quarter. They have undergone usage of more advanced IPV6 protocol by 13 %over the same time frame. Its average internet speed lies above the global average speed of 6.3 Mbps which is 21 % increase over an year.

Also Read: Internet Freedom Around the World has Declined in 2016: Report