A few weeks back, we came across iPhone 13 mini renders which showed that this year the camera model is redesigned. The new render shows two lenses placed in a diagonal arrangement instead of one above another. While it was just a render, so it was not 100 true to be believed. However recently a hand-on photo of iPhone 13 mini is leaked that confirms has the same design as that of the render, so it grants credibility to the render presented some weeks back, 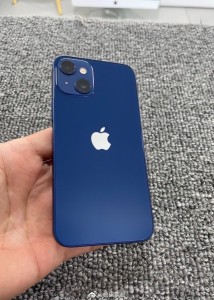 However, it should be noted that though both render and prototype are the same, the device is months away from production which means that end result may vary. Last week, we had come across CAD based render by Xleaks that also had two cameras placed diagonally.  The device is almost the same as the iPhone 12 with the only difference that is the diagonal placement of two sensors instead of three.

The reason behind this new camera configuration remains unknown. Maybe this layout is adapted to fit larger sensors which means that camera bumps on iPhone 13 mini will probably get thicker. The specs of the device are still unknown but leaks suggest that that LTPO displays will be adopted for all iPhone 13 series devices. The display size will also remain the same ie; 6.1-inch for the iPhone 13 and 13 Pro, 5.4-inches for the mini, and 6.7-inches for the Pro Max.