The phone is advertised with a logo that “no gradient means no youth”. It means that the company is emphasizing on the gradient color options as the plain colors have become the old folks now. The TV commercial revealed another gradient color option named as “Passionate Red” together with the Blue-White gradient. 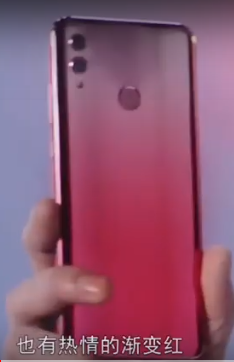 According to previous reports, Honor 10 Lite will feature a  6.21” screen with 1080p resolution.  Moreover, it will have a screen to body ratio of 19:9. The new device will have Kirin 710 chipset and GPU Turbo pre-installed.  The Phone will have a water drop notch like Huawei Mate 20. There is a mention of a 24-megapixel camera. The dual rear camera setup will have modest 13 MP + 2 MP sensors. The Honor 10 Lite Cameras are also expected to support AI Technology.

Furthermore, a limited edition Supreme Honor 10 Lite in partnership with the popular clothing brand is also expected to be released. A few days back, a press render was spotted showing the letters “Sup” on the back over a red gradient design. So, Honor may launch a limited edition as well. The Honor 10 Lite Launch Date is set to be Nov 21.  Honor 10 Lite Price will be revealed officially next week at the launch in Beijing.