Huawei’s Subsidiary, Honor is prepping to release their new smartphone, Honor 8A very soon. There had been a lot of rumors and teasers about this upcoming handset. Recently, Honor has put up a teaser poster on their Weibo account revealing Honor 8A Launch Date. According to the Honor 8A Teaser poster, the handset will go official on January 8.

Honor 8A Launch Date Is Decided To be Jan 8

According to the teaser poster, the upcoming handset will see the light on January 8. Furthermore, the poster has unveiled that the phone will have 64GB of onboard storage, an octa-core chipset and a display with a teardrop notch. Let’s have a look at the poster. 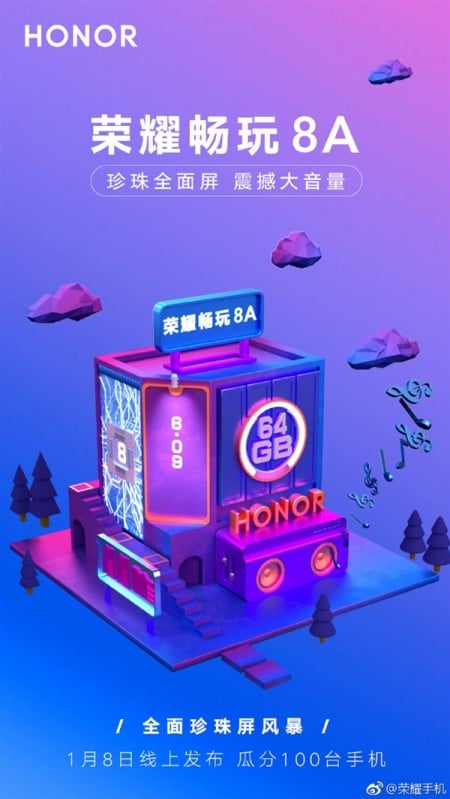 In addition to that, a few weeks back, the phone got listed on TENAA as well. According to the listings, Honor 8A will have a 6.088-inch HD+ IPS LCD. It will feature a 2.3GHz octa-core chipset paired with the 3GB of RAM, 32GB or 64GB of RAM. Moreover, the handset will have a 13MP main camera. On the other hand, there will be an 8MP selfie camera. The handset will run EMUI on top of Android 9 Pie.

Design wise, the Honor 8A will follow the typical Honor trend. There will be the volume keys and power button on the right side. On the top of the phone, there will be a 3.5 mm audio jack. However, the left side of the phone will sport nothing. On the top left corner of the smartphone, a 13 MP camera is positioned with the Honor logo that sits below. There had been no words by the company about Honor 8A yet. However, only a few days are left in its launch according to the official posters so, let’s see what comes next. The phone will see the light in China on January 8.