Design and Display of Honor 8S:

Honor 8S has a 5.7 inches’ display screen that supports 720 x 1520 Pixels resolution screen. The icons and display are satisfactory but it is not up to the mark because it has an LCD screen. The front side has a 5MP selfie shooter with a notch display whereas the functional keys are working within in the screen. Honor name is marked on the downside. It has an LED notification light on the top side too.

Now move towards the edges and on the top edge, it has an audio jack and a mic while the speakers, microUSB port and the secondary mic is present on the downside. It’s one edge has volume keys and power button while the opposite one has a SIM jacket on it.

If we talk about the back body then it has a textured body in which 80% body is textured and the rest 20% is not. The 13MP rear camera lens is marked at the top side with an LED flashlight.

If we talk about the camera of Honor 8S then it has a 13MP back camera lens and a 5MP selfie camera. The main features of honor 8s camera are Geo-tagging, Phase detection, touch focus, HDR, Video whereas beauty mode is also available in it. It supports video resolution of 1080p, the camera results are very average.

Honor 8S is a 4G enabled device with the access of 3G and 2G network also. It also gives us access to Wifi, Bluetooth, and FM Radio while WiFi is using standards of Wi-Fi 802.11 a/b/g/n/ac, dual-band, Wi-Fi Direct, and hotspot. Here it leads from infinix smart 3 plus because it has more Wi-Fi standards and it supports Wi-Fi direct too.

Honor 8S is low end smartphone and comes with in-box gifts such as Earphones & Cover. It has DewDrop Display, Face Unlocking Feature and at this price of range, that’s just remarkable. If you are looking for an average device under 20k then Honor 8S is a very good choice. 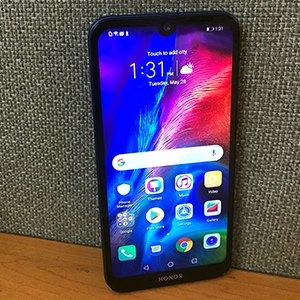