As we all know that Huawei is planning to release its upcoming smartphone, the Honor 8X very soon. We had already heard many rumors about the upcoming smartphone. In a previous teaser, we came to know that the company is going to launch the phone soon. Although at that time, the official launch date wasn’t revealed. Recently, Honor broke the silence and released a teaser poster on Weibo revealing its official launch date. Honor 8X Launch Date is set to be September 5. The company will launch the phone in China. However, there are still no words about its global availability.

The teaser not only revealed the official launch date although it also confirmed that the upcoming smartphone of Huawei’s subsidiary will come in two variants named 8X and 8X Max. The latter will offer a bigger screen while the former will have a smaller display as compared to 8X Max. Let’s have a look at the new teaser poster. 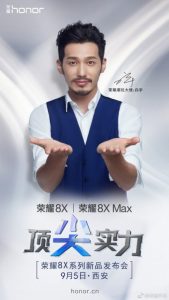 According to some of the previous reports, the ARE-AL00, which is reported as either 8X or 8S, arrived at TENAA. The photos revealed on TENAA showed the Huawei Honor 8X V-Shaped Notch. Most likely one of the two upcoming variants will boast a 7.12” screen and notched Full HD+ resolution.

Moreover, the upcoming device will have a 600-series Qualcomm chipset which will be either the Snapdragon 660 or the Snapdragon 636. The main camera may include a dual 16 MP + 5 MP setup. Moreover, the selfie shooter, tucked in the tiny notch will be of 8 MP. The phone will have 177.57×86.24×8.13mm dimensions due to the larger screen. As these specs are not officially announced yet so we are not sure about them. We will update you when we will get more information about the device.

It is expected that if you are a big screen lover then the Honor 8X duo will aim to be a budget alternative to the recently announced Honor Note 10.