Honor has launched the X20 SE in June. Now, the company is planning to bring another member to the X20 lineup. Honor X20 is coming on August 12. Honor has also posted an image on Weibo confirming the X20’s design. The company confirms that it will have a 64MP triple camera on the back, with the screen having a pill-shaped hole in the upper-left corner. 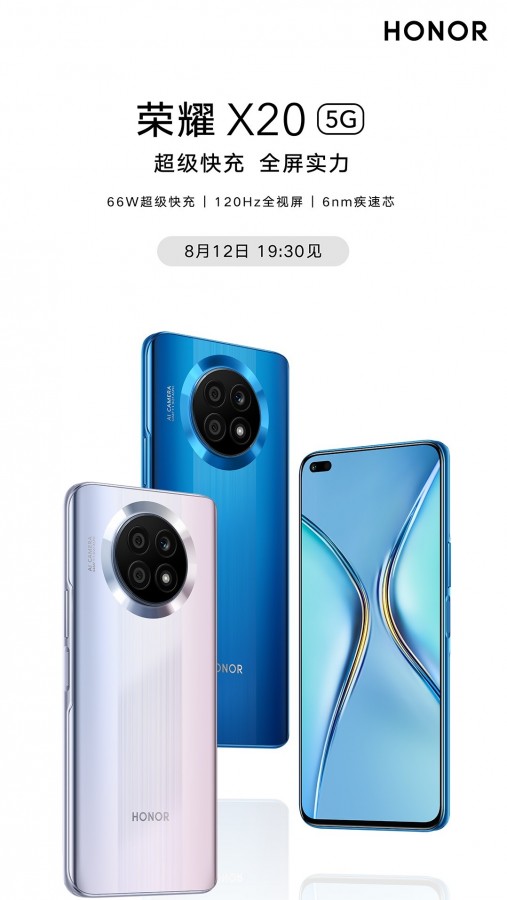 Moreover, the phone will be available in two colours. The phone also has a fingerprint reader on its right-side frame joined by the volume rocker. It is also possible to get an LCD panel. Honor didn’t reveal the screen’s diagonal or resolution either, but the phone maker did confirm the display will have a 120Hz refresh rate. Honor has also confirmed 5G connectivity. The phone will have a 66W charging and a 6nm chip at the helm.

Honor X20 SE comes in a 6GB/8GB RAM variant and the power side is supported by the Dimensity 700 chip. The two versions include an inbuilt 128GB of storage and are preloaded with Magic UI 4.0 based on Android 11 OS. Let’s see what other functions we will get in the coming phone. There is still time to get the phone officially. So we may get more information about the phone in the coming days.