Honor Note 10 is one of the upcoming phablets which is in the pipeline right now, eyeing a debut early in the next week. Honor’s own official social media handlers have confirmed Honor Note 10’s battery size. The Honor Note 10 will come with a spacious 5,000 mAh cell battery which can give a tough competition to the Galaxy Note 9’s oft-rumored 4,000 mAh battery. Honor Note 10’s 5000mAh battery sounds like a wishlist item.

The Honor Note 10 will support a massive 5,000mAh battery when it becomes official on July 31. This news has been confirmed through Honor’s official Weibo page in a teaser. Honor has also teased an advanced cooling technology of some sort which shows us a sign that the upcoming phablet will cater to hardcore mobile gamers. The massive 5,000 mAh battery will probably need to power a huge 6.95-inch AMOLED screen. Due to the large size of the screen, the expected weight of the body is 230 grams. 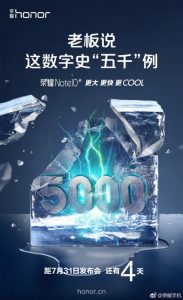 We already had a good idea of the Honor Note 10’s specs that were revealed by the TENAA listings. Honor Note 10 will house a 6.95-inch Super AMOLED screen of 1080x2220px resolution. It will support a Kirin 970 SoC with 6GB of RAM (possibly up to 8GB). In addition to that, it will feature a dual 16MP f/1.8 + 24MP f/1.8 main camera and a single 13MP selfie one. One of the most important and good specs of Honor Note 10 is its spacious battery of 5000mAh. It will definitely shine in the battery life department. It is also expected that it will give a tough competition to all the other upcoming phones because of its battery life and cool technology used in it which is being unveiled in the latest teaser.