Huawei’s sub-brand, Honor, is ready to launch one more edition of Honor Play next week. Honor Play Special Edition to Launch with Laser Engraved lines on the back. The honor will reveal this smartphone on August 1st. Moreover, the phone will be available in two colors, red and black only.

Both variants will have an attractive back design that features laser-engraved lines. Additionally, there are red accents for the rear camera setup and fingerprint scanner on both hues, as you can see from the promo image below. 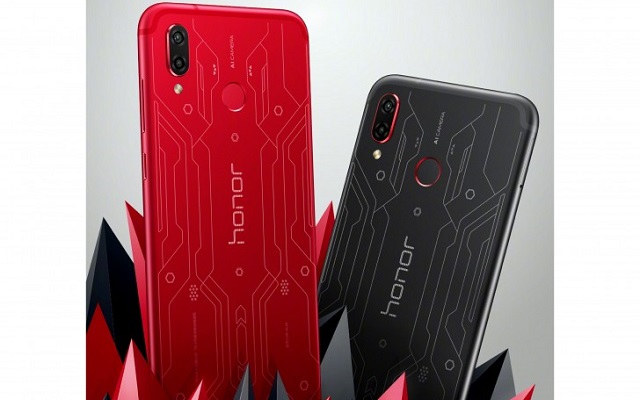 The new Honor Play Special Edition will have a better camera with an added AI photography algorithm for both front and rear shooters. And also, GPU Turbo is built-in as well for better gaming performance. Other specs are same as the Honor Play have.

Moreover, the Honor Play special Edition will feature a 6.3” screen with a 19:9 aspect ratio and 1,080 x 2,280 px resolution. It packs a 3,750 mAh battery, large by normal standards and about the size of the nubia Red Magic battery. This is the first Honor to ship with Android 8.1 Oreo and EMUI 8.2 out of the box, so it comes with the latest optimizations.

Moreover, the phone has a 16 MP + 2 MP dual camera on the back. The 16 MP selfie camera does 3D portrait lighting. The Honor Play Special Edition will launch on 1st August and it will cost around $366.